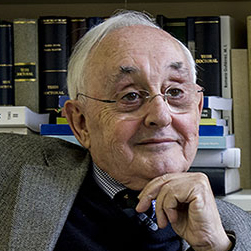 Academy. He is PhD in Medicine, specialised in Psychiatry, Neurology and Legal Medicine. He has been full professor at the University of Granada, for which he is still commissioned for the Maristan Network of which he has been Presidente since 1997 to 2015. He is invited postgraduate professor at the universities of Concepcion in Chile and at the National of Lanus in Argentina.
International profile. He has intervened as adviser on behave of PAHO/WHO, at Chile, Mexico, Peru and Uruguay. As well, he has participated at numerous workshops, international conferences and reports under the auspicious of PAHO/WHO. He was responsible of a WHO collaborating centre in Andalusia in the nineteen. He has been the President of three international events of the World Psychiatric Association (WPA) that took place in Granada (1989, 2008 y 2012). He is member of the Forensic Section of the WPA.
Research. He has participated as PI in Spain on nine research projects supported by the European Commission, four out of them within the V Framework Program along the decade of 2000. He is author of more of a hundred publications, most of them related to Social Psychiatry (epidemiology, development and evaluation of Mental Health services, adjuvant social factors to mental pathologies, human rights related to mental disability, domestic violence and coercive measures applied to people suffering from mental diseases, among others).