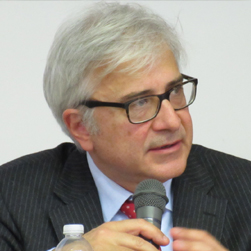 Roberto MEZZINA, psychiatrist, is currently Vice President (Program Development) of the World Federation for Mental Health for Europe. He is also one of the founders and currently Chair of the International Mental Health Collaborating Network established in 2001. Dr Mezzina contributed from 1978 to the experience in Trieste, which inspired the Italian Mental Health Reform Law of 1978, with the closure of the psychiatric hospital and the creation of a network of totally alternative community based network of services. He has been Director of the Department of Mental Health in Trieste, Italy, between 2012 and 2019, and from 2009 to 2019 Head of the WHO Collaborating Centre for Research and Training, based in Trieste. The WHOCC aimed to support community-based services and reform policies worldwide (UK, Denmark, Czech Republic, Australia, New Zealand, Poland, Serbia, France, Palestine among others). Dr Mezzina has been invited as teacher, keynote speaker and expert in hundreds of conferences and courses hold by Scientific Institutes, Universities, Mental Health Services in Italy, Europe and overseas, including the recent Global Mental Health Forum in Paris (November 2021). Prized by Zero Project at UN in Vienna, 2014, and as European Personality of the Year Award by Gamian Europe in 2017, he is currently member of WHO Advisory Group for the new World Mental Health Report and of the Technical Advisory Group for WHO Euro on Mental Health Impact of Covid-19.